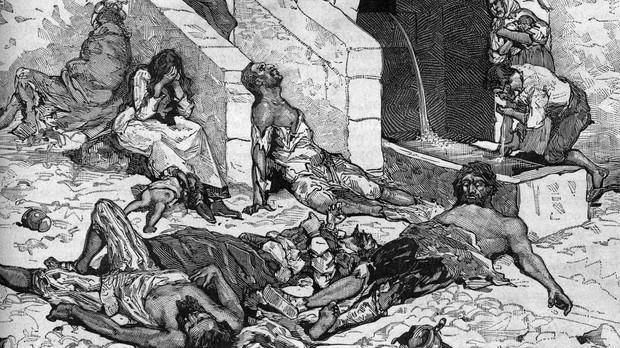 Their general misery was aggravated by people crowding into the city from the fields, and the worst affected were the new arrivals. There were no houses for them but they lived in huts that were stifling in the heat of summer and they were visited by death in conditions of total disorder. The bodies of those dying were heaped on each other, and in the streets and around the springs half-dead people reeled about in a desperate desire for water. The sanctuaries in which they had taken shelter were full of the bodies of those who had died there. Overwhelmed by the disaster people could not see what was to become of them and started losing respect for the laws of god and man alike. All the funeral customs they usually observed were cast into confusion and each buried their dead as best they could. Many people resorted to quite shameless forms of disposal through their lack of means after so many of their relatives had already died. They took advantage of the funeral pyres others had raised, and some of them would move in first, place their own dead on the pyre and set fire to it, while others threw whoever’s body they were carrying on top of one that was already burning and went away. It was the plague that first led to other forms of lawlessness in the city too. People were emboldened to indulge themselves in ways they would previously have concealed, since they saw the rapid change in fortunes – both for those who were well off and died suddenly and for those who originally had nothing but in a moment got possession of the property of these others. They therefore resolved to exploit these opportunities for enjoyment quickly, regarding their lives and their property as equally ephemeral. No one was eager to add to their own hardships for supposedly fine objectives, since they were uncertain whether they would die before achieving them. Whatever gave immediate pleasure or in any way facilitated it became the standard of what was good and useful. Neither fear of the gods nor law of man was any restraint: they judged it made no difference whether or not they showed them respect, seeing that everyone died just the same; on the contrary, no one expected to live long enough to go on trial and pay the penalty, feeling that a far worse sentence had already been passed and was hanging over their heads, and that it was only reasonable to get some enjoyment from life before it finally fell on them. Such was the burden of suffering the Athenians bore, with people dying inside the city and their land ravaged outside it. And in their distress they not surprisingly remembered the following verse, which the old men claimed had been recited long ago, ‘A Dorian war shall come and with it plague.’ There was some disagreement among them as to whether the word used by the men of old was not ‘plague’ but ‘famine’, but in the present circumstances the view naturally prevailed that it was ‘plague’, as people matched their memories to their sufferings. I fancy at any rate that if another Dorian war should visit them after this one and if that were accompanied by a famine they would probably recite the verse that way. There were those who also recalled an oracle given to the Spartans when the Spartans asked the god whether they should go to war and he answered that victory would be theirs if they fought with all their might and promised that he would himself take their side. They therefore supposed that what then happened was the fulfilment of the oracle, and indeed the plague did begin straight after the invasion of the Peloponnesians; and although it did not get into the Peloponnese to any significant extent, it invaded Athens in particular and after that other densely populated areas elsewhere. These were the occurrences relating to the plague. (tr. Jeremy Mynott)