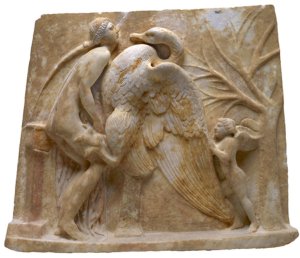 One may also understand how much beauty excels over other things in the world from our attitudes toward each of them. We wish to obtain other things only if we need them, but spiritually we experience no further concern over them. A longing for beautiful things, however, is innate in us, and it has a strength greater than our other wishes, just as its object is stronger. We distrust those who are foremost in intelligence or anything else, unless they win us over by treating us well every day and compelling us to like them. But we have goodwill toward beautiful people as soon as we see them, and we serve only them without fail, as if they were gods. We enslave ourselves to such people with more pleasure than we rule others, and we have more gratitude to them, even when they impose many tasks on us, than to those who demand nothing. We criticize those who come under any other power and denounce them as flatterers, but we think that those who serve beauty are idealistic and industrious. We feel such reverence and concern for this sort of quality that we disenfranchise those with beauty who have prostituted it and abused their own youth more than those who wrong the bodies of others. Those who guard their youth undefiled by base men, as if it were a temple, we honor for the rest of time as if they had done something good for the entire city. Why spend my time discussing human opinions? Zeus, the most powerful of all, has displayed his power in other things, but he thinks it right to become humble as he approaches beauty. He took the form of Amphitryon when he came to Alcmene. He joined Danaë as a golden shower. He became a swan when he fled into the bosom of Nemesis and again likened himself to one when he wed Leda. Clearly he always pursues this quality of nature with craft, not with violence. Beauty is so much more preferred among the gods than among us that they even pardon their wives when they are overcome by it. One might point out many immortal wives who have been overcome by a mortal’s beauty. None has sought to have the event pass unnoticed, as if it were something shameful. They have wanted what they did to be exalted in song as something noble, rather than concealed by silence. The greatest evidence of what I have been saying is that we would find that more mortals have become immortal because of their beauty than because of all other qualities (aretai).

And we may learn how superior beauty is to all other things by observing how we ourselves are affected by each of them severally. For in regard to the other things which we need, we only wish to possess them and our heart’s desire is set on nothing further than this; for beautiful things, however, we have an inborn passion whose strength of desire corresponds to the superiority of the thing sought. And while we are jealous of those who excel us in intelligence or in anything else, unless they win us over by daily benefactions and compel us to be fond of them, yet at first sight we become welldisposed toward those who possess beauty, and to these alone as to the gods we do not fail in our homage; on the contrary, we submit more willingly to be the slaves of such than to rule all others, and we are more grateful to them when they impose many tasks upon us than to those who demand nothing at all. We revile those who fall under the power of anything other than beauty and call them flatterers, but those who are subservient to beauty we regard as lovers of beauty and lovers of service. So strong are our feelings of reverence and solicitude for such a quality, that we hold in greater dishonour those of its possessors who have trafficked in it and ill-used their own youth than those who do violence to the persons of others ; whereas those who guard their youthful beauty as a holy shrine, inaccessible to the base, are honoured by us for all time equally with those who have benefited the city as a whole. But why need I waste time in citing the opinions of men? Nay, Zeus, lord of all, reveals his power in all else, but deigns to approach beauty in humble guise. For in the likeness of Amphitryon he came to Alcmena, and as a shower of gold he united with Danae, and in the guise of a swan he took refuge in the bosom of Nemesis, and again in this form he espoused Leda; ever with artifice manifestly, and not with violence, does he pursue beauty in women. And so much greater honour is paid to beauty among the gods than among us that they pardon their own wives when they are vanquished by it; and one could cite many instances of goddesses who succumbed to mortal beauty, and no one of these sought to keep the fact concealed as if it involved disgrace; on the contrary, they desired their adventures to be celebrated in song as glorious deeds rather than to be hushed in silence. The greatest proof of my statements is this: we shall find that more mortals have been made immortal because of their beauty than for all other excellences.

For beauty is spent by time or withered by disease; wealth ministers to vice rather than to nobility of soul, affording means for indolent living and luring the young to pleasure; strength, in company with wisdom, is, indeed, an advantage, but without wisdom it harms more than it helps its possessors, and while it sets off the bodies of those who cultivate it, yet it obscures the care of the soul. But virtue, when it grows up with us in our hearts without alloy, is the one possession which abides with us in old age; it is better than riches and more serviceable than high birth; it makes possible what is for others impossible; it supports with fortitude that which is fearful to the multitude; and it considers sloth a disgrace and toil an honor. (tr. George Norlin)

Never hope to conceal any shameful thing which you have done; for even if you do conceal it from others, your own heart will know.
Fear the gods, honor your parents, respect your friends, obey the laws.
Pursue the enjoyments which are of good repute; for pleasure attended by honor is the best thing in the world, but pleasure without honor is the worst.
Guard yourself against accusations, even if they are false; for the multitude are ignorant of the truth and look only to reputation. In all things resolve to act as though the whole world would see what you do; for even if you conceal your deeds for the moment, later you will be found out. But most of all will you have the respect of men, if you are seen to avoid doing things which you would blame others for doing. (tr. George Norlin)

Now, would we be satisfied if we could live in our city securely and have our daily needs well provided, if we are united in spirit within our city and have a good reputation among the other Greeks? In my opinion, if we have all this, I think our city will be completely prosperous. Now, the war has deprived us of all those things I just mentioned. It has made us poorer, has forced us to endure many dangers, has ruined our reputation among the Greeks, and has burdened us with every possible hardship. If we make peace, on the other hand, and behave as the common peace requires us to, we will govern our city with great security, we will be freed from the war, dangers, and confusion that now govern our relations with one another, we will make progress toward prosperity every day since we will be relieved of paying war taxes, fitting out triremes, or the other duties connected with war, and we will be able without fear to farm, to sail the sea, and to undertake all those other tasks that are suspended now because of the war. (tr. Terry L. Papillon)