After the Carthaginians had seized the suburb and pillaged the temple of Demeter and Corê, a plague struck the army. Over and above the disaster sent by influence of the city, there were contributing causes: that myriads of people were gathered together, that it was the time of year which is most productive of plagues, and that the particular summer had brought unusually hot weather. It also seems likely that the place itself was responsible for the excessive extent of the disaster; for on a former occasion the Athenians too, who occupied the same camp, had perished in great numbers from the plague, since the terrain was marshy and in a hollow. First, before sunrise, because of the cold from the breeze over the waters, their bodies were struck with chills, but in the middle of the day the heat was stifling, as must be the case when so great a multitude is gathered together in a narrow place. Now the plague first attacked the Libyans, and, as many of them perished, at first they buried the dead, but later, both because of the multitude of corpses and because those who tended the sick were seized by the plague, no one dared approach the suffering. When even nursing was thus omitted, there was no remedy for the disaster. For by reason of the stench of the unburied and the miasma from the marshes, the plague began with a catarrh; then came a swelling in the throat; gradually burning sensations ensued, pains in the sinews of the back, and a heavy feeling in the limbs; then dysentery supervened and pustules upon the whole surface of the body. In most cases this was the course of the disease; but some became mad and totally lost their memory; they circulated through the camp, out of their mind, and struck at anyone they met. In general, as it turned out, even help by physicians was of no avail both because of the severity of the disease and the swiftness of the death; for death came on the fifth day or on the sixth at the latest, amidst such terrible tortures that all looked upon those who had fallen in the war as blessed. In fact all who watched beside the sick were struck by the plague, and thus the lot of the ill was miserable, since no one was willing to minister to the unfortunate. For not only did any not akin abandon one another, but even brothers were forced to desert brothers, friends to sacrifice friends out of fear for their own lives. (tr. Charles Henry Oldfather)

Heracles took the field with the Calydonians against the Thesprotians, captured the city of Ephyra by storm, and slew Phyleus the king of the Thesprotians. And taking prisoner the daughter of Phyleus he lay with her and begat Tlepolemus. Three years after his marriage to Deïaneira Heracles was dining in the home of Oeneus and Eurynomus, the son of Architeles, who was still a lad in years, was serving him, and when the boy made some slip in the service Heracles gave him a blow with his fist, and striking him too hard he unintentionally killed the lad. Overcome with grief at this misfortune he went again into voluntary exile from Calydonia along with his wife Deïaneira and Hyllus, his son by her, who was still a boy in years. And when in his journeying he arrived at the Euenus river he found there the Centaur Nessus who was conveying travellers across the river for a fee. Nessus carried Deïaneira across first, and becoming enamoured of her because of her beauty he tried to assault her. But when she called to her husband for help Heracles shot the Centaur with an arrow, and Nessus, struck even while he was having intercourse with her and because of the sharpness of the blow being at once on the point of death, told Deianeira that he would give her a love-charm to the end that Heracles should never desire to approach any other woman. He urged her, accordingly, to take the seed which had fallen from him and, mixing it with olive oil and the blood which was dripping from the barb of the arrow, to anoint with this the shirt of Heracles. This counsel, then, Nessus gave Deïaneira and at once breathed his last. And she put the seed, as Nessus had enjoined upon her, into a jar and dipped in it the barb of the arrow and kept it all unknown to Heracles. And he, after crossing the river, came to Ceÿx, the king of Trachis, and made his dwelling with him, having with him the Arcadians who always accompanied him on his campaigns. (tr. Charles Henry Oldfather)

Since the Athenians viewed with alarm the rising power of Philip, they came to the assistance of any people who were attacked by the king, by sending envoys to the cities and urging them to watch over their independence and punish with death those citizens who were bent on treason, and they promised them all that they would fight as their allies, and, after publicly declaring themselves the king’s enemies, engaged in an out-and-out war against Philip. The man who more than any other spurred them on to take up the cause of Hellas was the orator Demosthenes, the most eloquent of the Greeks of those times. Even his city was, however, unable to restrain its citizens from their urge toward treason, such was the crop, as it were, of traitors that had sprung up at that time throughout Hellas. Hence the anecdote that when Philip wished to take a certain city with unusually strong fortifications and one of the inhabitants remarked that it was impregnable, he asked if even gold could not scale its walls. For he had learned from experience that what could not be subdued by force of arms could easily be vanquished by gold. So, organizing bands of traitors in the several cities by means of bribes and calling those who accepted his gold “guests” and “friends,” by his evil communications he corrupted the morals of the people. (tr. Charles L. Sherman)

Sardanapallus, the thirtieth in succession from Ninus, who founded the empire, and the last king of the Assyrians, outdid all his predecessors in luxury and sluggishness. For not to mention the fact that he was not seen by any man residing outside the palace, he lived the life of a woman, and spending his days in the company of his concubines and spinning purple garments and working the softest of wool, he had assumed the feminine garb and so covered his face and indeed his entire body with whitening cosmetics and the other unguents used by courtesans, that he rendered it more delicate than that of any luxury-loving woman. He also took care to make even his voice to be like a woman’s, and at his carousals not only to indulge regularly in those drinks and viands which could offer the greatest pleasure, but also to pursue the delights of love with men as well as women; for he practised sexual indulgence of both kinds without restraint, showing not the least concern for the disgrace attending such conduct. To such an excess did he go of luxury and of the most shameless sensual pleasure and in temperance, that he composed a funeral dirge for himself and commanded his successors upon the throne to inscribe it upon his tomb after his death; it was composed by him in a foreign language but was afterwards translated by a Greek as follows:
Knowing full well that thou wert mortal born,
Thy heart lift up, take thy delight in feast;
When dead no pleasure more is thine. Thus I,
Who once o’er mighty Ninus ruled, am naught
But dust. Yet these are mine which gave me joy
In life—the food I ate, my wantonness,
And love’s delights. But all those other things
Men deem felicities are left behind.
Because he was a man of this character, not only did he end his own life in a disgraceful manner, but he caused the total destruction of the Assyrian Empire, which had endured longer than any other known to history. (tr. Charles Henry Oldfather) 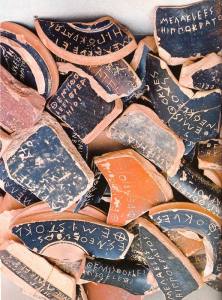 An old saying has been handed down that it is not men of average ability but those of outstanding superiority who destroy democracies. For this reason some cities, suspecting those of their public men who are the strongest, take away from them their outward show of power. It seems that the step to the enslavement of the fatherland is a short one for men who continue in positions of power, and that it is difficult for those to abstain from monarchy who through eminence have acquired hopes of ruling; for it is natural that men who thirst for greatness should seek their own aggrandizement and cherish desires that know no bounds. The Athenians, for example, exiled the foremost of their citizens for this reason, having established by law what was known among them as ostracism; and this they did, not to inflict punishment for any injustice previously committed, but in order that those citizens who were strong enough to disregard the laws might not get an opportunity to do wrong at the expense of their fatherland. Indeed, they used to recite as an oracle that saying of Solon in which, while foretelling the tyranny of Peisistratus, he inserts this couplet: “Destruction cometh upon a city from its great men; and through ignorance the people fall into slavery to a tyrant.” (tr. Russel M. Geer) 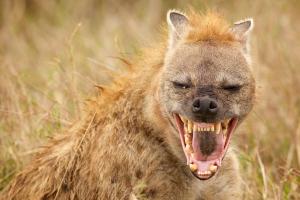 The animal which the Ethiopians call the crocottas* has a nature which is a mixture of that of a dog and that of a wolf, but in ferocity it is more to be feared than either of them, and with respect to its teeth it surpasses all animals; for every bone, no matter how huge in size, it easily crushes, and whatever it has gulped down its stomach digests in an astonishing manner. And among those who recount marvellous lies about this beast there are some who relate that it imitates the speech of men, but for our part they do not win our credence.

* Probably a kind of hyena.