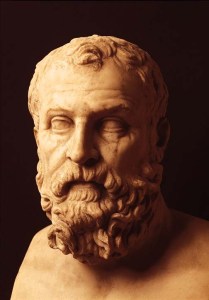 Before achieving what of the goals for which I brought the people together* did I stop? In the verdict of time I will have as my best witness the mighty mother of the Olympian gods, dark Earth, whose boundary markers** fixed in many places I once removed; enslaved before, now she is free. And I brought back to Athens, to their homeland founded by the gods, many who had been sold, one legally another not, and those who had fled under necessity’s constraint, no longer speaking the Attic tongue, as wanderers far and winde are inclined to do. And those who suffered shameful slavery right here, trembling before the whims of their masters, I set free. These things I did by the exercise of my power, blending together force and justice, and I persevered to the end as I promised. I wrote laws for the lower and upper classes alike, providing a straight legal process for each person. If another had taken up the goad as I did, a man who gave bad counsel and was greedy, he would not have restrained the masses. For if I had been willing to do what then was pleasing to their opponents and in turn whatever the others [i.e., the masses] planned for them, this city would have been bereft of many men. For that reason I set up a defence on everyside and turned about like a wolf among a pack of dogs.

* Precise meaning disputed.
** As a sign of mortgaged land.