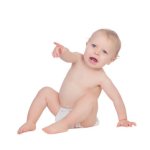 The same old man then told us about Daniel the Egyptian abbot. He said: ‘One day Daniel went to Terenuthis to sell his manual labour, when a young man begged him, saying: “Venerable man, in God’s name, please come to my house and say a prayer over my wife, because she is infertile.” Compelled by the young man, Daniel went with him to his house and prayed for his wife, and through God’s will the wife conceived in her belly. Now some people who did not fear the lord started to slander the old man, saying: “It’s really the young man who is infertile; his wife was made pregnant by Daniel the abbot.” This rumour reached the old man’s ears, and he wrote to the wife’s husband: “When your wife gives birth, let me know.” So when the wife gave birth, the young man sent him a message, saying: “Thanks to God and your prayers, father, my wife has given birth.” Then Daniel the abbot went to him and said: “Make breakfast and invite your relatives and friends.” So when they were having breakfast together, the old man took the child into his hands and in front of everyone he asked it: “Who is your father?” And the child said: “That guy!”, pointing out the young man with its hand. The child was only 22 days old! And they all praised God who guards the truth for those who seek him out with all their hearts.’ (tr. David Bauwens)