You are a model of family devotion, and you loved your splendid brother, matching his deep regard for you with equal affection. You love his daughter as if she were your own, and to her you re-enact the fondness not only of an aunt, but also that of the father she has lost. For these reasons I have no doubt that you will be highly delighted to know that she is turning out worthy of her father, of you, and of her grandfather. She is highly intelligent, and exceedingly thrifty. Her love for me is the index of her chastity. These qualities are enhanced by her enthusiasm for literature, which her love for me has fostered. She possesses and repeatedly reads and even memorizes my books. What concern she shows when I am due to speak in court! And what delight, once the speech is finished! She posts individuals to report to her the assent and the applause which I have received, and the outcome which I have imposed on the judge. Whenever I am giving a recitation, she sits close by, concealed by a curtain, and listens most avidly to the praises heaped on me. She also sings my verses and adapts them to the lyre, with no schooling from a music-master, but with affection, which is the best possible teacher. For these reasons I entertain the most sanguine hope that we will enjoy enduring harmony which will grow day by day. It is not my time of life or my body which she loves, for these gradually decay with age, but my fame. No other attitude befits one reared by your hands and trained by your instructions, for in her association with you she has set eyes only on what is pure and honourable, and finally she has grown to love me as the outcome of your recommendation. For out of your respect for my mother, whom you revered as a parent, you fashioned and encouraged me from my earliest boyhood, and you were wont to prophesy that I would become the sort of person I appear to be in my wife’s eyes. So we vie in giving you thanks–– I because you have given her to me, and she because you have given me to her. It is as though you chose us for each other! Farewell. (tr. Patrick Gerard Walsh)

Marius Priscus was indicted by the Africans whom he governed as proconsul. He pleaded guilty, and asked for assessors to be appointed. Cornelius Tacitus and I, who had been bidden to represent the provincials, believed that it was in keeping with the trust reposed in us to inform the Senate that Priscus by his monstrous savagery had overstepped any charges for which assessors could be appointed, for he had received money for the condemnation and even the execution of innocent persons. Catius Fronto in reply pleaded that no investigation should be made beyond the law covering extortion. He is a man with the greatest expertise at extracting tears, and he filled all the sails of his speech with the breeze, as it were, of compassion. There was considerable dispute, with considerable shouting on both sides, some maintaining that the Senate’s judicial inquiry was limited by legal principle, and others claiming that its discretion was free and unfettered, and that the punishment should be measured by the guilt of the defendant. In the end Julius Ferox, the consul-designate, who is a man of uprightness and probity, proposed that in the meantime assessors should indeed be appointed for Marius, but that the persons to whom he was alleged to have sold the punishment of innocent men should be summoned. This proposal was not merely carried, but after those major disagreements it was absolutely the only one which won support. Such outcomes demonstrate that benevolence and pity exercise an initial impact which is penetrating and considerable, but that gradually mature thought and reason stifle them and cause them to subside. The result is that a position maintained by many in mingled shouting finds no one willing to defend it when the rest are silent, the reason being that assessment of factors cloaked by turmoil becomes clear once you detach it from that turmoil. (tr. Patrick Gerard Walsh) 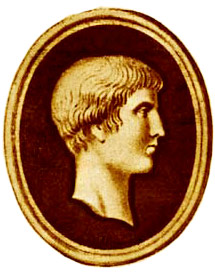 I hear that Valerius Martial has died, and I find it sad news. He was a talented and intelligent man with a keen mind, the sort of poet with abundant wit and gall, and an equal measure of openness. When he was retiring from Rome, I presented him with his travelling-expenses as a gesture of friendship and acknowledgement of the verses he composed about me. It was an ancient custom to honour poets who had written eulogies of individuals or of cities with distinctions or with money. But in our day this practice in particular, like other splendid and notable customs, has lapsed. For now that we have abandoned praiseworthy pursuits, we consider it pointless to receive accolades. Would you like to hear the verses for which I thanked him? I would refer you to the collection, if I did not remember some of them. If you like these, you must look out the rest in his publications. He is addressing his Muse, bidding her make for my house on the Esquiline, and to approach with deference.

But be sure that you don’t when drunk go knocking
At that eloquent door when you’re not welcome.
He devotes all his days to stern Minerva,
While for the ears of the court of Centumviri
He works away at what men of later ages
Can compare even with Arpinum’s pages.*
You will go more safely when late lamps burn;
That is your hour, when Bacchus rages wildly,
When the rose is queen, when men’s hair is perfumed.
Why, unbending Catos would then read me!

Surely it was right that he who penned these lines should then have been waved off in the friendliest way, and should be mourned as a close friend now he has died? For he gave me the greatest tribute that he could, and he would have given more if that had been possible. Yet what greater thing can a man bestow on a person than fame, praise, and immortality? You will respond that his writings will not be immortal. Perhaps they will not be, but he composed them believing that they would be. Farewell.

* At this early stage of his career Pliny’s chief occupation was with the lawsuits in the civil court. Arpinum was the birthplace of Cicero, with whom Pliny loves to be compared.

(tr. Patrick Gerard Walsh, with one of his notes)

Is the weather in your parts as rude and boisterous as it is with us ? All here is tempest and inundation. The Tiber has overflowed its channel, and deeply flooded its lower banks. Though drained by a dyke, which the Emperor providently had cut, it submerges the valleys, swims along the fields, and entirely overspreads the flats. The streams which it ordinarily receives and carries down commingled to the sea, it now forcibly checks in their course, by, so to speak, advancing to meet them; and thus deluges with borrowed waters lands it cannot reach itself. That most delightful of rivers, the Anio, which seems invited and detained by the villas upon its banks, has destroyed and carried away much of the woods that shade its brink. It has undermined mountains, and its channel being blocked by the resulting landslides, it has wrecked houses in the endeavour to regain its course, and surges high above the ruins. Dwellers in the uplands, who were out of reach of this fearful inundation, have seen, here the household gear and heavy furniture of lordly mansions, there instruments of husbandry, elsewhere ploughs and oxen with their drivers, elsewhere again herds of cattle let loose and astray, together with trunks of trees, or beams and gables of the neighbouring villas all floating about far and wide. Nor indeed have even these uplands, to which the river did not rise, escaped calamity. For long torrential rains, and waterspouts hurled down from the clouds, have destroyed all the enclosures on the valuable farms, and shaken, and even overturned, public buildings. Numbers have been maimed, crushed, or buried by such accidents, and loss of property has been aggravated by bereavements. I am extremely uneasy lest this extensive disaster should have spread to you; I beg therefore, if it has not, you will immediately relieve my anxiety. And indeed, I desire you would inform me though it should; for there is little difference between expecting misfortune and undergoing it; except that grief has limits, whereas apprehension has none. For we grieve only for what we know has happened; but we fear all that possibly may happen.
Farewell.
(tr. William Melmoth, revised by Winifred Margaret Lambart Hutchinson)

Ashes were already falling, hotter and thicker as the ships drew near, followed by bits of pumice and blackened stones, charred and cracked by the flames: then suddenly they were in shallow water, and the shore was blocked by the debris from the mountain. For a moment my uncle wondered whether to turn back, but when the helmsman advised this he refused, telling him that Fortune stood by the courageous and they must make for Pomponianus at Stabiae. He was cut off there by the breadth of the bay (for the shore gradually curves round a basin filled by the sea) so that he was not as yet in danger, though it was clear that this would come nearer as it spread. Pomponianus had therefore already put his belongings on board ship, intending to escape if the contrary wind fell. This wind was of course full in my uncle’s favour, and he was able to bring his ship in. He embraced his terrified friend, cheered and encouraged him, and thinking he could calm his fears by showing his own composure, gave orders that he was to be carried to the bathroom. After his bath he lay down and dined; he was quite cheerful, or at any rate he pretended he was, which was no less courageous. (tr. Betty Radice)

Work, cares and distractions – all are interrupted, cut short, and driven out of my mind, for the death of Junius Avitus has been a terrible blow. He had assumed the broad stripe of the senator in my house and had my support when standing for office, and such moreover was his affectionate regard for me that he took me for his moral guide and mentor. This is rare in the young people of today, few of whom will yield to age or authority as being their superior. They are born with knowledge and understanding of everything; they show neither respect nor desire to imitate, and set their own standards. Avitus was not like this. His wisdom consisted in his belief that others were wiser than himself, his learning in his readiness to be taught. (tr. Betty Radice)