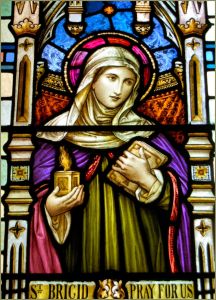 One day, when a rain-storm happened to be raging in the heavens,
the chill thunder-clouds were suddenly banking together in the sky,
and as the waters poured down in heavy torrents from on high,
a girl hurriedly made her way through the pastures
in the middle of the fields and entered her home, her dress dripping:
Brigid was the name that her old parents had given her long ago.
While she was changing the holy dress she had been wearing and found
herself unable to hang the damp garment in the middle of the room,
there happened to fall from the tiny window a beam
sparkling with the light of the radiant sun,
which crossed the room and shone on her holy dress.
Then someone among an assorted group of unknown people
tried to trick that excellent girl with this ruse,
for, pointing to the smooth rays as if they were strong wood,
he persuaded her to hang her garment upon their trembling beams.
Trickery was his motive, but the pure-hearted maiden
believed him and, arranging her dress on the sparkling rays,
she spread the dripping robe in the middle of the room
and in the empty air, supported by God’s power,
it stood suspended rom the rays, a wondrous sight to see,
for the hanging robe did not break the shining shafts of sunlight,
while it stood wet and dripping along all its fringe
but remained suspended there, damp, as if attached to a strong rope.
Everyone was amazed and eagerly bandied the story about,
extolling the maiden’s name and calling on Christ,
who not only supported a garment on the tiniest motes,
but sustains the whole world by His divine might,
who in the beginning by His Father’s power created the world
who is God’s eternal strength, who is believed to be the right hand
of the Father, light begotten of unbegotten light.
Readers, learn from your poet this small selection of the many deeds
which that maiden performed through Christ’s excellent grace.
I now leave it to others to write down the rest after me.
(tr. Peter Godman)