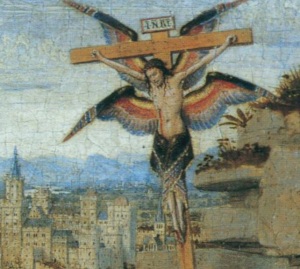 While he dwelt in the hermitage which, from the place in which it is situate, is called Alverna, two years before he gave back his soul to Heaven, he saw in a vision of God a man like a seraph having six wings, standing over him with hands outstretched and feet joined together, fixed to a cross. Two wings were raised above his head, two were spread out for flight, and two veiled the whole body. Now, when the blessed servant of the Most High saw this, he was filled with exceeding great wonder, but he could not understand what this vision might mean. Yet he rejoiced greatly and was filled with vehement delight at the benign and gracious look wherewith he saw that he was regarded by the seraph, whose beauty far exceeded all estimation ; but the crucifixion, and the bitterness of the seraph’s suffering smote him altogether with fear. Thus he arose, so to speak, sorrowful and glad; and joy and grief alternated in him. He anxiously pondered what this vision might portend, and his spirit laboured sore to come at the understanding of it. And while he continued without any clear perception of its meaning, and the strangeness of the vision was perplexing his heart, marks of nails began to appear in his hands and feet, such as he had seen a little while before in the Man crucified who had stood over him. His hands and feet seemed pierced in the midst by nails, the heads of the nails appearing in the inner part of the hands and in the upper part of the feet, and their points over against them. Now those marks were round in the inner side of the hands and elongated on the outer side, and certain small pieces of flesh were seen like the ends of nails bent and driven back, projecting from the rest of the flesh. So also the marks of nails were imprinted in his feet, and raised above the rest of the flesh. Moreover his right side, as it had been pierced by a lance, was overlaid with a scar, and often shed forth blood, so that his tunic and drawers were many times sprinkled with the sacred blood. (tr. Alan George Ferrers Howell)