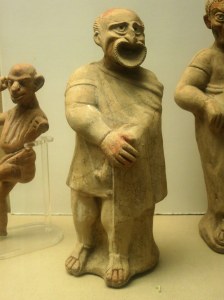 Laberius was a harsh and outspoken Roman knight, whom Caesar for a fee of 500,000 sesterces invited to appear on the stage and to act in person in the mimes which he was always writing. But a potentate’s invitation, or even his mere request, in effect amounts to compulsion; and so it is that Laberius, in the prologue to his play, testifies to the fact that he has been compelled by Caesar with the following lines:
‘Necessity, whose slanting onslaught
many have wished, but few have been able to escape,
to what corner have you forced me almost at the end of my faculties!
No canvassing, no bribery,
no intimidation, no violence, no pressure
could ever shift me from my station in my prime;
behold in age how easily an outstanding man’s words
expressed in gentle spirit, words quietly spoken,
conciliatory nice-sounding words, have toppled me from my place!
For indeed who would be able to tolerate me,
a human, refusing him to whom the very gods have not been able to refuse anything?
I, twice thirty years spent without reproach,
having set forth from my hearth a Roman knight,
shall return home as a comic. Evidently this day
I have lived one more than I ever should have lived.
Fortune, immoderate in good and ill alike,
if it was already your fancy to snap
my reputation’s tip when it blossomed with literary praise,
why did you not bend me to pick when still resilient,
when I had the power with limbs budding at the tip
to please the Roman People and would have been able to please such a man?
Is it now that you cast me down? For what? What have I to offer the theatre?
My grace of form, or my impressive presence?
My manliness of spirit, or the sound of my melodious voice?
As creeping ivy throttles the strength of trees,
so Old Age throttles me with her embrace of years;
and like the tomb, I retain nothing but my name.’
Moreover, during the performance of the play, he was continuously taking his revenge, however he could; dressed as a Syrian, who pretended that he had been flogged, and looked like a runaway slave, he would cry out:
‘furthermore, Roman citizens, we are losing our liberty.’
And after a while he added:
‘he whom many fear must inevitably fear many.’
At the sound of these words everyone in the audience turned their eyes and faces on Caesar alone, observing that his immoderate behaviour had received a fatal blow with this caustic gibe. Because of this Caesar transferred his support to Publilius.
(tr. Costas Panayotakis; fr. 90 tr. Adrian S. Gratwick)