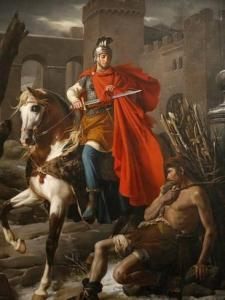 One day then, in the middle of a winter more bitterly cold than usual (so much so that many perished as a result of the severity of the icy weather) when Martin had nothing with him apart from his weapons and a simple military cloak, he came across a naked beggar at the gate of the city of Amiens. The man begged the people who were passing to have pity on him but they all walked past him. Then Martin, who was filled with God’s grace, understood that this man had been reserved for him, since the others were not showing him any mercy. But what was he to do? He had nothing apart from the cloak he was wearing, for he had already used up the rest of his things for a similar purpose. So he seized the sword which he wore at his side, divided the cloak in two, gave half to the beggar and then put the remaining piece on again. Some of the bystanders began to laugh because he looked odd with his chopped-up cloak, but many who were more sensible sighed deeply because they had not done the same despite the fact that, because they had more than Martin, they could have clothed the beggar without themselves being reduced to nakedness. The following night, therefore, when Martin had fallen asleep, he saw Christ clothed in the part of his cloak which he had used to cover the beggar. He was told to look very carefully at the Lord and to recognize the clothing which he had given. Then he heard Jesus saying in a clear voice to the host of angels standing all around: ‘Martin who is still a catechumen covered me with this cloak.’ Undoubtedly, when the Lord declared that He Himself was clothed in the person of this beggar, He was recalling His own words for he had once said: ‘As often as you do this to one of the least, you have done it to me.’ [Matt. 25:40] And he deigned to reveal himself in the clothing which the beggar had received in order to confirm His witness to such a good deed. (tr. Carolinne White) 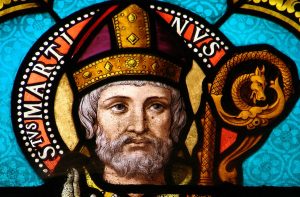 Again, when in a certain village he had demolished a very ancient temple, and had set about cutting down a pine-tree, which stood close to the temple, the chief priest of that place, and a crowd of other heathens began to oppose him. And these people, though, under the influence of the Lord, they had been quiet while the temple was being overthrown, could not patiently allow the tree to be cut down. Martin carefully instructed them that there was nothing sacred in the trunk of a tree, and urged them rather to honor God whom he himself served. He added that there was a moral necessity why that tree should be cut down, because it had been dedicated to a demon. Then one of them who was bolder than the others says, “If you have any trust in thy God, whom you say you worship, we ourselves will cut down this tree, and be it your part to receive it when falling; for if, as you declare, your Lord is with you, you will escape all injury.” Then Martin, courageously trusting in the Lord, promises that he would do what had been asked. Upon this, all that crowd of heathen agreed to the condition named; for they held the loss of their tree a small matter, if only they got the enemy of their religion buried beneath its fall. Accordingly, since that pine-tree was hanging over in one direction, so that there was no doubt to what side it would fall on being cut, Martin, having been bound, is, in accordance with the decision of these pagans, placed in that spot where, as no one doubted, the tree was about to fall. They began, therefore, to cut down their own tree, with great glee and joyfulness, while there was at some distance a great multitude of wondering spectators. And now the pine-tree began to totter, and to threaten its own ruin by falling. The monks at a distance grew pale, and, terrified by the danger ever coming nearer, had lost all hope and confidence, expecting only the death of Martin. But he, trusting in the Lord, and waiting courageously, when now the falling pine had uttered its expiring crash, while it was now falling, while it was just rushing upon him, simply holding up his hand against it, he put in its way the sign of salvation. Then, indeed, after the manner of a spinning-top (one might have thought it driven back), it swept round to the opposite side, to such a degree that it almost crushed the rustics, who had taken their places there in what was deemed a safe spot. Then truly, a shout being raised to heaven, the heathen were amazed by the miracle, while the monks wept for joy; and the name of Christ was in common extolled by all. The well-known result was that on that day salvation came to that region. (tr. Alexander Roberts)