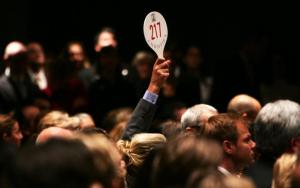 When he* had persevered, therefore, with enormous labour and patience for three whole years at Carnuntum, he put an end to the Marcomannic war which, together with the latter, the Quadi, Vandals, Sarmatae, Suebi and all the barbarians had provoked. He killed many thousand men, freed the Pannonians from slavery, and again celebrated a triumph at Rome with Commodus Antoninus, his son, whom he had by then made Caesar. Since the treasury had been exhausted to pay for this war and he had no funds to distibute and he did not want to place any tax on the provincials or the senate, at an auction held in the forum of the deified Trajan he sold off the belongings of his royal way of life, gold vessels, crystal goblets, wine flavoured with myrrh, his wife’s and his own silk and gold embroidered garments and many jewelled ornaments. The sale went on for two months consecutively and a lot of gold was raised. After his victory, however, he gave back the purchase price to those buyers who were willing to return what they had bought but he troubled no one who preferred to keep what he had purchased.

Diocletian was of a crafty disposition, with much sagacity, and keen penetration. He was willing to gratify his own disposition to cruelty in such a way as to throw the odium upon others; he was however a very active and able prince. He was the first that introduced into the Roman empire a ceremony suited rather to royal usages than to Roman liberty, giving orders that he should be adored, whereas all emperors before him were only saluted. He put ornaments of precious stones on his dress and shoes, when the imperial distinction had previously been only in the purple robe, the rest of the habit being the same as that of other men. But Herculius was undisguisedly cruel, and of a violent temper, and showed his severity of disposition in the sternness of his looks. Gratifying his own inclination, he joined with Diocletian in even the most cruel of his proceedings. But when Diocletian, as age bore heavily upon him, felt himself unable to sustain the government of the empire, he suggested to Herculius that they should both retire into private life, and commit the duty of upholding the state to more vigorous and youthful hands. With this suggestion his colleague reluctantly complied. Both of them, in the same day, exchanged the robe of empire for an ordinary dress, Diocletian at Nicomedia, Herculius at Milan, soon after a magnificent triumph which they celebrated at Rome over several nations, with a noble succession of pictures, and in which the wives, sisters, and children of Narseus were led before their chariots. The one then retired to Salonae, and the other into Lucania. Diocletian lived to an old age in a private station, at a villa which is not far from Salonae, in honourable retirement, exercising extraordinary philosophy, inasmuch as he alone of all men, since the foundation of the Roman empire, voluntarily returned from so high a dignity to the condition of private life, and to an equality with the other citizens. That happened to him, therefore, which had happened to no one since men were created, that, though he died in a private condition, he was enrolled among the gods. (tr. John Selby Watson)