There is a law at Ceos that those who are extremely elderly invite each as if going to a party or to a festival with sacrifices, meet, put on garlands and drink hemlock. This they do when they become aware that they are incapable of performing tasks useful to their country, and that their judgment is by now rather feeble owing to the passing of time. (tr. Nigel G. Wilson) 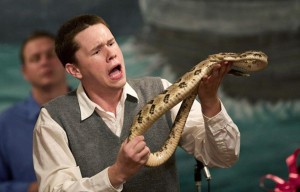 When Pompeius Rufus was Aedile at the Panathenaea a medicine-man, one of those who keep snakes for show, amid a crowd of his fellow-practitioners applied an asp to his arm in order to demonstrate his skill, and was bitten. Thereupon he sucked out the poison with his mouth. He failed however to swallow some water afterwards, there being none at hand although he had got some ready (the vessel had been upset by an act of treachery), and as he had not washed off the poison and thoroughly rinsed his mouth he passed away after, believe, two days without suffering any pain, though the poison had little by little reduced his gums and his mouth to putrescence. (tr. Alwyn Faber Scholfield) 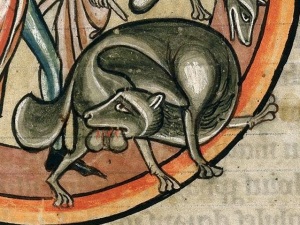 The Beaver is an amphibious creature: by day it lives hidden in rivers, but at night it roams the land, feeding itself with anything that it can find. Now it understands the reason why hunters come after it with such eagerness and impetuosity, and it puts down its head and with its teeth cuts off its testicles and throws them in their path, as a prudent man who, falling into the hands of robbers, sacrifices all that he is carrying, to save his life, and forfeits his possessions by way of ransom. If however it has already saved its life by self-castration and is again pursued, then it stands up and reveals that it offers no ground for their eager pursuit, and releases the hunters from all further exertions, for they esteem its flesh less. Often however Beavers with testicles intact, after escaping as far away as possible, have drawn in the coveted part, and with great skill and ingenuity tricked their pursuers, pretending that they no longer possessed what they were keeping in concealment. (tr. Alwyn Faber Scholfield)

The Hyena, according to Aristotle, has in its left paw the power of sending to sleep and can with a mere touch induce torpor. For instance, it often visits stables, and when it finds any creature asleep it creeps softly up and puts what you might call its sleep-inducing paw upon the creature’s nose, and it is suffocated and overpowered. Meantime the Hyena scoops out the earth beneath the head to such a depth as makes the head bend back into the hole, leaving the throat uppermost and exposed. Thereupon if fastens on to the animal, throttles it, and carries it off to its lair. (tr. Alwyn Faber Scholfield) 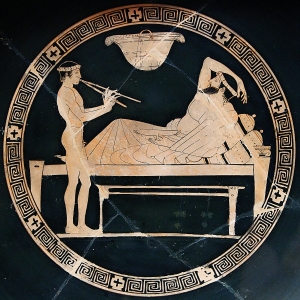 Though I have many other good things to report of the Spartan ephors, there is one I have chosen to mention now. When one of the handsome young men in their society chose a rich lover in preference to one who was poor but of good character, they imposed a fine, punishing, it would seem, the desire for possessions by a monetary penalty. And any man of good appearance and character who did not fall in love with someone well-bred was also fined, because despite his excellence he did not love anyone. It was clear that he could have made his beloved, and perhaps even another man, similar to himself. Lovers’ affections for their beloved has a remarkable power of stimulating the virtues, if the former are themselves worthy of respect. In fact there is also a Spartan law, that when a young man commits a misdemeanour, the ephors are indulgent to a naive character and to the inexperience of youth, but they punish his lover instead, because they require lovers to watch and control what the young do. (tr. Nigel G. Wilson)

A boy from Eretria attended Zeno’s school over quite a long period, until reaching maturity. After that he returned to Eretria and his father asked him what wisdom he had learned in such a long time. The boy said he would show him, and soon did so. When his father became annoyed and finally beat him, he remained calm and patient and said that what he had learned was to endure the anger of parents and not to lose his temper. (tr. Nigel G. Wilson)