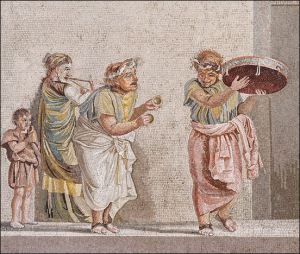 Now that the circle of your third half-decade has turned four times, what are theatrical extravaganzas to you, Crisp? How unseemly for well-read grey hairs is such a pleasure so late in life! You, beguiled by tuneful strings! You, entranced by the ditties of singers! You, running a discriminating eye over painted figures! Much better for you to live among men of your own age, detached and without rancor, searching for the truth in ancient volumes. Everyone should gratefully seize the pleasures that are proper for him. A boy enjoys carefree games, a young man is charmed by the lavishness of the theater; but it remains for an old man to use his time wisely as it passes. (tr. Niall Rudd)