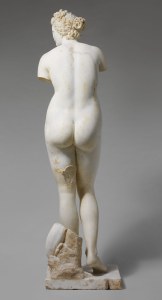 People in those days were so attached to a life of luxury that they actually dedicated a temple to Aphrodite Kallipugos (“of the Beautiful Ass”), for the following reason. A farmer had two beautiful daughters, who got into an argument with one another one day and went out to the road and began soliciting opinions as to which of them had the nicer ass. A young fellow, whose father was an old man, came along at that point, and they showed themselves off to him. After he saw them, he voted for the older girl and fell in love with her; and after he reached the city he got sick, and told his brother, who was younger than him, what had happened. His brother also went out into the country, and after he got a look at the girls, he fell in love with the other one. Their father tried to convince them to marry someone more respectable; but when he failed to convince them, he fetched the girls for them from the countryside, having persuaded their father, and joined them to his sons in marriage. The inhabitants of the city accordingly referred to them as the Kallipugoi (“Women with Beautiful Asses”), as Cercidas of Megalopolis reports in his Iambs, where he says:
There were a pair of kallipugoi in Syracuse.
After the became owners of some valuable property, therefore, they dedicated a temple to Aphrodite and called the goddess Kallipugos, according to Archelaus in his Iambs (SH 131). (tr. Stuart Douglas Olson)