The two rivals were ill-matched. The one was somewhat tamed by declining years; for long he had worn the toga and forgotten in peace the leader’s part; courting reputation and lavish to the common people, he was swayed entirely by the breath of popularity and delighted in the applause that hailed him in the theatre he built; and trusting fondly to his former greatness, he did nothing to support it by fresh power. The mere shadow of a mighty name he stood. Thus an oak-tree, laden with the ancient trophies of a nation and the consecrated gifts of conquerors, towers in a fruitful field; but the roots it clings by have lost their toughness, and it stands by its weight alone, throwing out bare boughs into the sky and making a shade not with leaves but with its trunk; though it totters doomed to fall at the first gale, while many trees with sound timber rise beside it, yet it alone is worshipped. 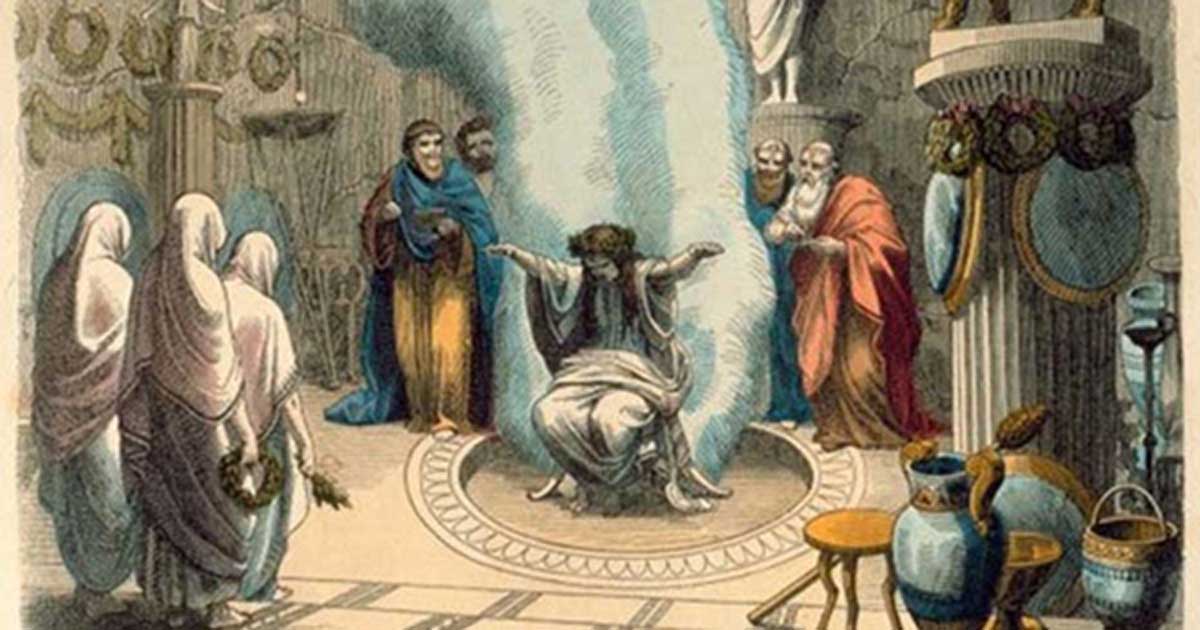 
Scared at last the maiden took refuge by the tripods; she drew near to the vast chasm and there stayed; and her bosom for the first time drew in the divine power, which the inspiration of the rock, still active after so many centuries, forced upon her. At last Apollo mastered the breast of the Delphian priestess; as fully as ever in the past, he forced his way into her body, driving out her former thoughts, and bidding her human nature to come forth and leave her heart at his disposal. Frantic she careers about the cave, with her neck under possession; the fillets and garlands of Apollo, dislodged by her bristling hair, she whirls with tossing head through the void spaces of the temple; she scatters the tripods that impede her random course; she boils over with fierce fire, while enduring the wrath of Phoebus. Nor does he ply the whip and goad alone, and dart flame into her vitals: she has to bear the curb as well, and is not permitted to reveal as much as she is suffered to know. All time is gathered up together: all the centuries crowd her breast and torture it; the endless chain of events is revealed; all the future struggles to the light; destiny contends with destiny, seeking to be uttered. The creation of the world and its destruction, the compass of the Ocean and the sum of the sands—all these are before her. (tr. James Duff Duff) 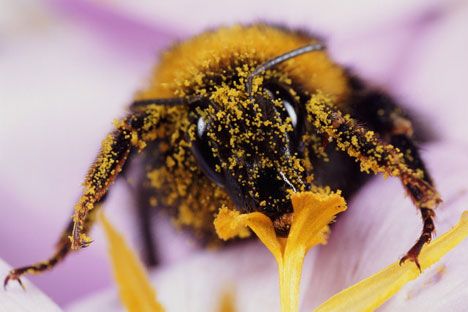 The cause of Rome was as good as lost, and all the rabble, at a loss for want of a master, swarmed upon the shore. But utterance came with a rush from the sacred breast of Cato: “It seems then, soldiers, that you too fought with the same desire as others, in defence of tyranny—that you were the troops of Pompey, and not of Rome. You no longer suffer in order to set up a tyrant; your life and death belong to yourselves, not to your leaders; there is no one for whom you gain the whole world, and now you may safely conquer for yourselves alone. Yet now you desert the ranks; you miss the yoke when your neck is relieved, and you cannot endure existence without a tyrant. But you have now a quarrel worthy of brave men. Pompey was suffered to make full use of your life-blood : now, when freedom is in sight, do you refuse to fight and die for your country? Out of three masters Fortune has spared but one. Shame on you! The court of Egypt and the bow of the Parthian soldier have done more for the cause of lawful government. Depart, degenerate men, neglectful alike of Ptolemy’s gift and your own weapons. Who would suppose that your hands were ever stained with bloodshed? Caesar will take your word for it that you were quick to turn your backs to him, and first in the flight from Philippi in Thessaly. Go and fear not: if Caesar be your judge, you, who were not subdued by battle or siege, have deserved to have your lives spared. Base slaves! Your former master is dead, and you welcome his heir. Why do you not seek to earn a greater reward than mere life and pardon? Seize the hapless wife of Magnus and daughter of Metellus, and carry her over the sea; lead captive the sons of Pompey; and so outdo the gift of Ptolemy, Also, whoever bears my head to the hated tyrant will receive no small reward for his gift. By the price of my head your troops will learn that they did well to follow my standard. Rouse up therefore, commit a mighty crime, and gain your reward. Mere flight is the crime of cowards.” By this speech he recalled all the ships from mid-sea. Even so, when the swarm deserts the cells that have hatched their young, they forget the comb; their wings are no longer intertwined, but each bee flies independently and plays truant, ceasing to suck the bitter thyme; but, if the sound of Phrygian brass rebukes them, at once in alarm they stop their flight and go back to their task of bearing pollen, and renew their love of scattered honey; the shepherd on the meadow of Hybla is relieved, and rejoices that the wealth of his cottage is safe. Thus by Cato’s words the resolution to endure lawful warfare was impressed upon his men. (tr. James Duff Duff) 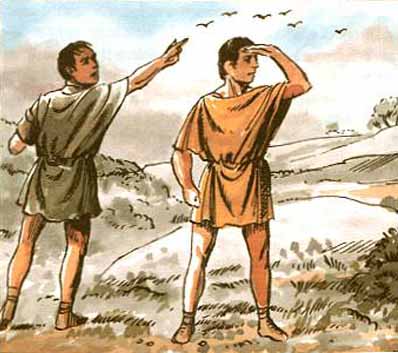 Ever since Romulus founded his city by the flight of a vulture on the left, and peopled it with the criminals of the Asylum, down to the catastrophe of Pharsalia, Rome ought to have remained in slavery. I have a grudge against Fortune on the score of the Bruti*. Why did we enjoy a period of lawful government, or years named after the consuls? Fortunate are the Arabs and Medes and Eastern nations, whom destiny has kept continuously under tyrants. Of all the nations that endure tyranny our lot is the worst, because we blush for our slavery. In very truth there are no gods who govern mankind: though we say falsely that Jupiter reigns, blind chance sweeps the world along. Shall Jupiter, though he grasps the thunderbolt, look on idly from high heaven at the slaughter of Pharsalia? Shall he forsooth aim his fires at Pholoe and Oeta, at the pines of Mimas and the innocent forest of Rhodope, and shall Cassius, rather than he, strike Caesar down ? He brought night upon Thyestes and doomed Argos to premature darkness; will he then grant daylight to Pharsalia that sees the guilt as great, of so many swords wielded by brothers and fathers? Man’s destiny has never been watched over by any god. Yet for this disaster
we have revenge, so far as gods may give satisfaction to mortals: civil war shall make dead Caesars the peers of gods above; and Rome shall deck out dead men with thunderbolts and haloes and constellations, and in the temples of the gods shall swear by ghosts.

* He refers to the Brutus who expelled the Tarquins.

O cruel destiny! Air fatal to inhale, and epidemic disease; maddening famine, cities consigned to the flames, and earthquakes that could bring to ruin populous cities—all these might be glutted by the men whom Fortune drew from every quarter to premature death, snatching away the gifts of long ages even while she displayed them, and arraying nations and chiefs upon the battle-field; by them she wished to show to collapsing Rome, what greatness fell with her. What city ever possessed a wider empire, or ran more quickly from success to success? Each war added nations to Rome; each year the sun saw her move forward towards either pole; a small part of the East excepted, night, and day from beginning to end, and all the sky revolved for Rome, and the stars in their courses saw nothing that was not hers. But the fatal day of Pharsalia reversed her destiny and undid the work of all the past. Thanks to that bloody field, India dreads not the Roman rods, no Roman consul arrests the nomad Dahae and makes them dwell in cities, or leans on the plough* in Sarmatia with his robe looped up; it is owing to Pharsalia that Parthia still owes us stern retribution, and that Freedom, banished by civil war, has retreated beyond the Tigris and the Rhine, never to return; often as we have wooed her with our life-blood, she wanders afar, a blessing enjoyed by Germans and Scythians, and never turns an eye on Italy: would that our nation had never known her!

* In ancient times it was the business of the consul to trace out with the plough the limits of a colony planted in a conquered country. The Dahae were nomads who wandered over the plains to the East of the Caspian.

Therefore the armies rushed forward, each inspired with the same passionate ardour, the one eager to escape a tyranny, the other to gain it. These hands will bring it to pass that, whatever the ninth century* unfolds, it shall be free from warfare. This battle will destroy nations yet unborn; it will deprive of their birthtime and sweep away the men of the generation coming into the world. Then all the Latin race will be a legend; dust-covered ruins will scarce be able to indicate the site of Gabii and Veii and Cora, the houses of Alba and the dwellings of Laurentum—a depopulated country, where no man dwells except the senators who are forced to spend one night there by Numa’s law which they resent**. It is not the tooth of time that has wrought this destruction and consigned to decay the memorials of the past: in all these uninhabited cities we see the guilt of civil war. How far reduced are the numbers of the human race! All the people born on earth cannot supply inhabitants for town or country; a single city contains us all. The corn-fields of Italy are tilled by chained labourers; the ancient roof-tree is rotten and ready to fall, but none dwell beneath it; Rome is not peopled by her own citizens but swarms with the refuse of mankind, and we have sunk her so low, that civil war, for all her many inmates, is no longer possible. Pharsalia is the cause of so great a mischief. The fatal names of Cannae and of Allia, cursed long ago by the Roman Calendar, must give place to Pharsalia. Rome has marked the date of lighter calamities, but has decided to ignore this day.

* Lucan lived in the ninth century from the foundation of Rome. The lack of men in that age was due, he says, to the slaughter of Pharsalia.
** The Roman consuls had to be present at Alba for the celebration of the Latin Festival.

With these words he took off the covering from the head, and held it in his hands. By now the features, relaxed by death, had changed the aspect of that familiar face. When Caesar first saw it, he did not condemn the gift nor turn away: his eyes were fixed upon the face till he could be sure. Then, when he saw the proof of the crime, and thought it safe at last to be the loving kinsman, he shed crocodile tears and forced out groans while his heart rejoiced. By tears alone was he able to hide his obvious delight; and thus he belittles the king’s horrid service, preferring to mourn the severed head of his kinsman rather than owe obligation for it. Though he had trampled on corpses of senators with face unmoved, and had beheld dry-eyed the field of Pharsalia, to Magnus alone he dares not deny the tribute of tears. (tr. James Duff Duff)