There was once a discussion, in my presence and hearing, of the rank and order of obligations, carried on by a company of men of advanced age and high position at Rome, who were also eminent for their knowledge and command of ancient usage and conduct. And when the question was asked to whom we ought first and foremost to discharge those obligations, in case it should be necessary to prefer some to others in giving assistance or showing attention, there was a difference of opinion. But it was readily agreed and accepted, that in accordance with the usage of the Roman people the place next after parents should be held by wards entrusted to our honour and protection; that second to them came clients, who also had committed themselves to our honour and guardianship; that then in the third place were guests; and finally relations by blood and by marriage. Of this custom and practice there are numerous proofs and illustrations in the ancient records, of which, because it is now at hand, I will cite only this one at present, relating to clients and kindred. Marcus Cato in the speech which he delivered before the censors Against Lentulus wrote thus: “Our forefathers regarded it as a more sacred obligation to defend their wards than not to deceive a client. One testifies in a client’s behalf against one’s relatives; testimony against a client is given by no one. A father held the first position of honour; next after him a patron.” Masurius Sabinus, however, in the third book of his Civil Law assigns a higher place to a guest than to a client. The passage from that book is this: “In the matter of obligations our forefathers observed the following order: first to a ward, then to a guest, then to a client, next to a blood relation, finally to a relation by marriage. Other things being equal, women were given preference to men, but a ward who was under age took precedence of one who was a grown woman. Also those who were appointed by will to be guardians of the sons of a man against whom they had appeared in court, appeared for the ward in the same case.” Very clear and strong testimony on this subject is furnished by the authority of Gaius Caesar, when he was high priest; for in the speech which he delivered In Defence of the Bithynians he made use of this preamble: “In consideration either of my guest-friendship with king Nicomedes or my relationship to those whose case is on trial, O Marcus Iuncus, I could not refuse this duty. For the remembrance of men ought not to be so obliterated by their death as not to be retained by those nearest to them, and without the height of disgrace we cannot forsake clients to whom we are bound to render aid even against our kinsfolk.” (tr. John C. Rolfe) 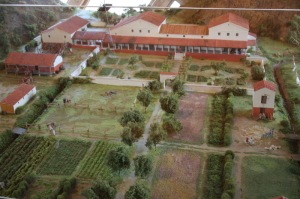 When the master arrives at the farmstead, after paying his respects to the god of the household, let him go over the whole farm, if possible, on the same day; if not, at least on the next. When he has learned the condition of the farm, what work has been accomplished and what remains to be done, let him call in his overseer the next day and inquire of him what part of the work has been completed, what has been left undone; whether what has been finished was done betimes, and whether it is possible to complete the rest; and what was the yield of wine, grain, and all other products. Having gone into this, he should make a calculation of the labourers and the time consumed. If the amount of work does not seem satisfactory, the overseer claims that he has done his best, but that the slaves have not been well, the weather has been bad, slaves have run away, he has had public work to do; when he has given these and many other excuses, call the overseer back to your estimate of the work done and the hands employed. If it has been a rainy season, remind him of the work that could have been done on rainy days: scrubbing and pitching wine vats, cleaning the farmstead, shifting grain, hauling out manure, making a manure pit, cleaning seed, mending old harness and making new; and that the hands ought to have mended their smocks and hoods. Remind him, also, that on feast days old ditches might have been cleaned, road work done, brambles cut, the garden spaded, a meadow cleared, faggots bundled, thorns rooted out, spelt ground, and general cleaning done. (tr. William Davis Hooper, revised by Harrison Boyd Ash)