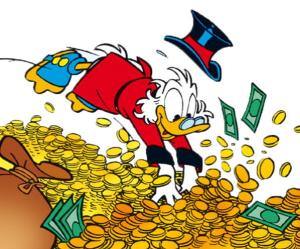 The Romans, it is true, say that the many virtues of Crassus were obscured by his sole vice of avarice; and it is likely that the one vice which became stronger than all the others in him, weakened the rest. The chief proofs of his avarice are found in the way he got his property and in the amount of it. For at the outset he was possessed of not more than three hundred talents; then during his consulship he sacrificed the tenth of his goods to Hercules, feasted the people, gave every Roman out of his own means enough to live on for three months, and still, when he made a private inventory of his property before his Parthian expedition, he found that it had a value of seventy-one hundred talents. The greatest part of this, if one must tell the scandalous truth, he got together out of fire and war, making the public calamities his greatest source of revenue. For when Sulla took the city and sold the property of those whom he had put to death, considering it and calling it spoil of war, and wishing to defile with his crime as many and as influential men as he could, Crassus was never tired of accepting or of buying it. And besides this, observing how natural and familiar at Rome were such fatalities as the conflagration and collapse of buildings, owing to their being too massive and close together, he proceeded to buy slaves who were architects and builders. Then, when he had over five hundred of these, he would buy houses that were afire, and houses which adjoined those that were afire, and these their owners would let go at a trifling price owing to their fear and uncertainty. In this way the largest part of Rome came into his possession. But though he owned so many artisans, he built no house for himself other than the one in which he lived; indeed, he used to say that men who were fond of building were their own undoers, and needed no other foes. (tr. Bernadotte Perrin)