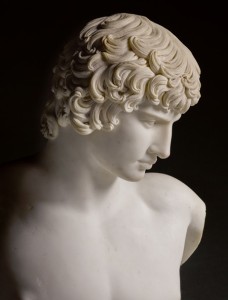 In Egypt also he rebuilt the city named henceforth for Antinous. Antinous was from Bithynium, a city of Bithynia, which we also call Claudiopolis; he had been a favourite of the emperor and had died in Egypt, either by falling into the Nile, as Hadrian writes, or, as the truth is, by being offered in sacrifice. For Hadrian, as I have stated, was always very curious and employed divinations and incantations of all kinds. Accordingly, he honoured Antinous, either because of his love for him or because the youth had voluntarily undertaken to die (it being necessary that a life should be surrendered freely for the accomplishment of the ends Hadrian had in view), by building a city on the spot where he had suffered this fate and naming it after him; and he also set up statues, or rather sacred images, of him, practically all over the world. Finally, he declared that he had seen a star which he took to be that of Antinous, and gladly lent an ear to the fictitious tales woven by his associates to the effect that the star had really come into being from the spirit of Antinous and had then appeared for the first time. On this account, then, he became the object of some ridicule, and also because at the death of his sister Paulina he had not immediately paid her any honour . . . (tr. Earnest Cary)