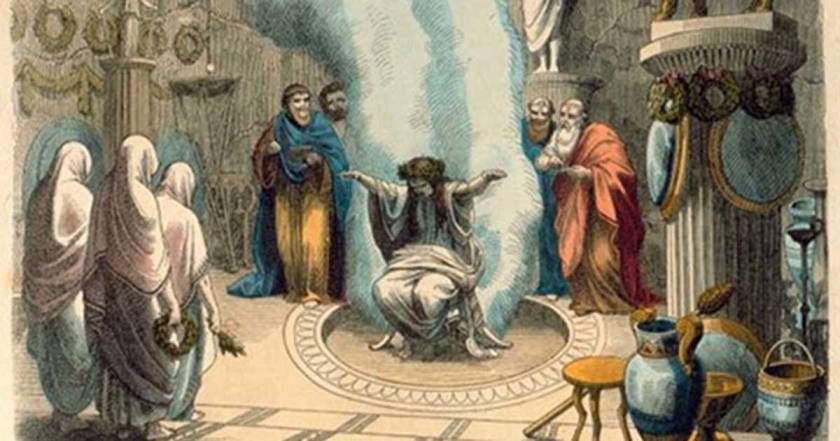 Scared at last the maiden took refuge by the tripods; she drew near to the vast chasm and there stayed; and her bosom for the first time drew in the divine power, which the inspiration of the rock, still active after so many centuries, forced upon her. At last Apollo mastered the breast of the Delphian priestess; as fully as ever in the past, he forced his way into her body, driving out her former thoughts, and bidding her human nature to come forth and leave her heart at his disposal. Frantic she careers about the cave, with her neck under possession; the fillets and garlands of Apollo, dislodged by her bristling hair, she whirls with tossing head through the void spaces of the temple; she scatters the tripods that impede her random course; she boils over with fierce fire, while enduring the wrath of Phoebus. Nor does he ply the whip and goad alone, and dart flame into her vitals: she has to bear the curb as well, and is not permitted to reveal as much as she is suffered to know. All time is gathered up together: all the centuries crowd her breast and torture it; the endless chain of events is revealed; all the future struggles to the light; destiny contends with destiny, seeking to be uttered. The creation of the world and its destruction, the compass of the Ocean and the sum of the sands—all these are before her. (tr. James Duff Duff)