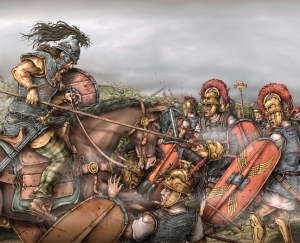 But the din and confusion were so great that neither advice nor orders could be heard, and so far were the men from knowing their proper standards companies and places, that they had hardly enough spirit to arm and prepare themselves to fight, and some were borne down while more encumbered than protected by their armour. Indeed the fog was so thick that ears were of more use than eyes, and the groans of the wounded, the sound of blows on body or armour and the mingled shouts and screams of assailants and assailed made them turn and gaze, now this way and now that. Some, as they sought to escape, were swept into a crowd of combatants and held there; others, trying to get back into the fight, were turned aside by a throng of fugitives. When attempts to break through had resulted everywhere in failure and they found themselves shut in on the flanks by the mountains and the lake, and in front and rear by the enemy; when it became apparent that their only hope of safety lay in their right arms and their swords; then every man became his own commander and urged himself to action, and the battle began all over again. It was no ordered battle, with the troops marshalled in triple line, nor did the vanguard fight before the standards and the rest of the army behind them, neither did each soldier keep to his proper legion cohort and maniple: it was chance that grouped them, and every man’s own valour assigned him his post in van or rear; and such was the frenzy of their eagerness and so absorbed were they in fighting, that an earthquake, violent enough to overthrow large portions of many of the towns of Italy, turn swift streams from their courses, carry the sea up into rivers, and bring down mountains with great landslides, was not even felt by any of the combatants. (tr. Benjamin Oliver Foster)