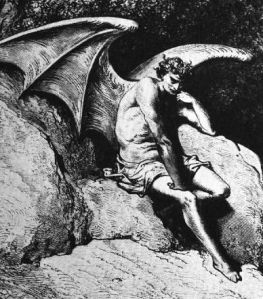 When these abnormal sins have been completed, the candles are lit again and each resumes his place. Then from a dark corner of the room a man comes forward. From the loins upward he shines brighter than the sun, as they say, but his lower part is shaggy like a cat. His brilliance illuminates the entire place. Then the master plucks off something from the novice’s clothing, and says to that radiant figure: “Master, this has been given to me; I in turn give it to you.” The shining one then answers: “You have served me well; and in the future you will often serve me again, and even better. I entrust to your care that which you have given me.” And with these words he vanishes instantly. They even receive the body of the Lord every year at Easter from the hand of the priest, and, carrying it home in their mouths, they throw it into the latrine in contempt of our Saviour. These most wretched of men, who blaspheme the divine ruler with their polluted lips, also claim in their madness that the lord of heavens has acted violently, unjustly and guilefully in casting Lucifer down into hell. These wretches even worship him, they declare that he is the creator of all heavenly bodies, and that after the downfall of God he will return to his former glory. Through him, and with him, and not before him they hope to reach eternal bliss. They profess that all deeds that are pleasing to God should not be done, and one should rather do what God hates. Lord have mercy, who has ever heard of such things? (tr. Alex October1625, adapted and expanded by David Bauwens)