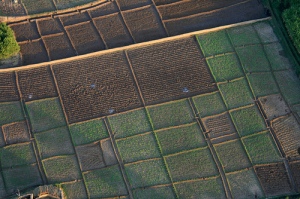 Surely it is obvious enough, if one looks at the whole world, that it is becoming daily better cultivated and more fully peopled than anciently. All places are now accessible, all are well known, all open to commerce; most pleasant farms have obliterated all traces of what were once dreary and dangerous wastes; cultivated fields have subdued forests; flocks and herds have expelled wild beasts; sandy deserts are sown; rocks are planted; marshes are drained; and where once were hardly solitary cottages, there are now large cities. No longer are (savage) islands dreaded, nor their rocky shores feared; everywhere are houses, and inhabitants, and settled government, and civilized life. What most frequently meets our view (and occasions complaint), is our teeming population: our numbers are burdensome to the world, which can hardly supply us from its natural elements; our wants grow more and more keen, and our complaints more bitter in all mouths, whilst Nature fails in affording us her usual sustenance. In very deed, pestilence, and famine, and wars, and earthquakes have to be regarded as a remedy for nations, as the means of pruning the luxuriance of the human race; and yet, when the hatchet has once felled large masses of men, the world has hitherto never once been alarmed at the sight of a restitution of its dead coming back to life after their millennial exile*.

(tr. Peter Holmes, with his note)