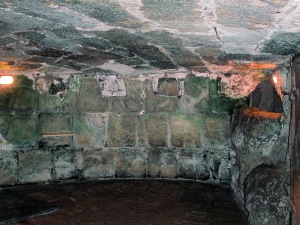 In the prison, when you have gone up a little to the left, there is a place called the Tullianum which is a depression of about twelve feet into the ground. Walls protect it on all sides and above there is a dome made with stone arches, but squalor, murk, and stench make it hideous and terrible to behold. After Lentulus was sent down into this place, the executioners strangled him with a rope as ordered. Thus that man, an aristocrat from the glorious family of the Cornelii, a man who had held consular power at Rome, found an end that suited his character and his actions. Cethegus, Statilius, Gabinius, and Caeparius were executed in the same way. (tr. William W. Batstone)