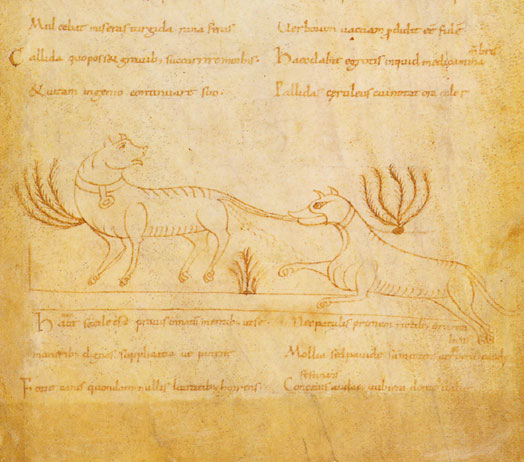 Ysengrimus, now a monk, was asked to take the place of a priest who had just been buried. He asked what task a priest customarily performed. Pasturing sheep or preparing food? The monks said, speaking figuratively, that the priest was in charge of looking after the sheep; so he willingly obeyed. Promptly instructed to say “Dominus vobiscum!” Ysengrimus cheerfully repeated “Lambus-here-come!” interpreting “cum” as the vernacular word, with a sharp accent, in preference to the Latin word “veni.” (He often found that the sheep of the Schelde had learned no speech but the vernacular; when he called them to a council in the Latin tongue, he had clear proof from them that they didn’t know how to speak in a similar way so he threw them into cruel bondage, and refused to allow the criminals to go anywhere before they had learned Latin. This was why this kind monk ordered them to come in the vernacular tongue he knew them to use.) When they taught him to say “Amén” in the Greek fashion, he stressed it “Lámb-en.” Some said that he was incapable of saying it any better, others that he had said it intentionally. On all sides buzzed the comment: “This monk’s words give prior warning of his intentions. He is plotting to shear the sheep of more than their fleece; this monk is preparing to take away something that doesn’t taste like wool! A new set of clothes disguises treachery, but it doesn’t change its nature. The black cowl doesn’t carry with it the trustworthiness it leads one to expect.” (tr. Jill Mann)