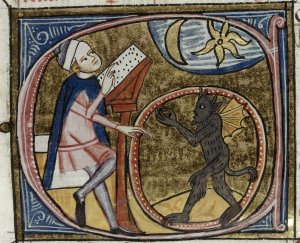 Then the Devil and his servants, the demons, began showing themselves to humans in various forms, talking to people and trying to get them to offer sacrifices to them high in the mountains and deep in the woods, worshipping them as gods. And they used the names of people who were criminals, people who had spent their lives in all sorts of criminality and law-breaking. So one demon would claim to be Jupiter, who had been a magus so sunk in incestuous adultery that he took his own sister—whose name was Juno—as his wife, seduced his daughters, Minerva and Venus, and also committed the most disgusting incest with his grandchildren and all his relatives. But another demon named himself Mars, the instigator of discord and conflict. Then another demon, the deceitful deviser of all theft and fraud, decided to call himself Mercury: people who lust as much for profit as this god sacrifice to him when they pass through a crossroads by making mounds of rocks and throwing stones at them. Also, another demon took the name Saturn for as himself: since cruelty was his whole existence, he even ate his own children as they were being born. Another pretended to be Venus, a woman who was a whore and had whored herself not only in countless adulteries but also with Jupiter, her father, and her brother Mars. See how lost people were in those days when ignorant peasants honoured the demons—sinning grievously—with devices of their own, and then for their own purposes the demons used the language invented by such people, so that they would worship them as gods, offer them sacrifices and imitate the evil deeds of the demons whose names they invoked. (tr. Brian Copenhaver)