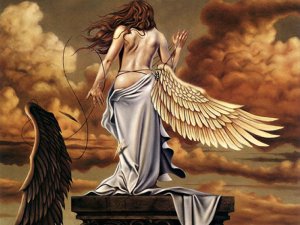 And in this dance the soul sees the spring of life, the spring of intellect, the principle of being, the cause of good, the root of the soul; these are not poured out from him with the result that they diminish him; for there is no bulk; otherwise the things generated from him would be perishable. But as it is they are eternal, because their principle remains the same, not divided up into them but abiding as a whole. So they also abide; just as the light abides if the sun abides. For we are not cut off from him or separate, even if the nature of body has intruded and drawn us to itself, but we breathe and are preserved because that Good has not given its gifts and then gone away but is always bestowing them as long as it is what it is. But we exist more when we turn to him and our well-being is there, but being far from him is nothing else but existing less. There the soul takes its rest and is outside evils because it has run up into the place which is clear of evils; and it thinks there, and is not passive, and its true life is here; for our present life, the life without God, is a trace of life imitating that life. But life in that realm is the active actuality of Intellect, and the active actuality generates gods in quiet contact with that Good, and generates beauty, and generates righteousness, and generates virtue. It is these the soul conceives when filled with God, and this is its beginning and end; its beginning because it comes from thence, and its end because its good is there. And when it comes to be there it becomes itself and what it was; for what it is here and among the things of this world is a falling away and an exile and a “shedding of wings”. And the soul’s innate love makes clear that the Good is there, and this is why Eros is coupled with the Psyches in pictures and stories. For since the soul is other than God but comes from him it is necessarily in love with him, and when it is there it has the heavenly love, but here love becomes vulgar; for the soul there is the heavenly Aphrodite, but here becomes the vulgar Aphrodite, a kind of whore. And every soul is Aphrodite; and this is symbolised in the story of the birthday of Aphrodite and Eros who is born with her. (tr. Arthur Hilary Armstrong)