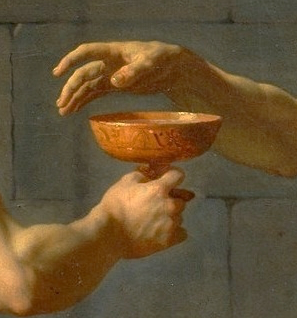 As we were leaving the house, Peison and I ran into Melobius and Mnesitheides coming out of the slave workshop. They met us just at the doors of the house and asked where we were going. Peison said to my brother’s, to examine the contents of that house as well. They told him to carry on but ordered me to accompany them to Damnippus’ house. Peison came near me, and told me to stay quiet and keep my spirits up, because he would join us there. At Damnippus’, we found Theognis keeping guard over various others. They handed me over to him and left. It seemed to me that the situation was so dangerous that death was already staring me in the face. So I called Damnippus and said, “You are a close friend of mine, and I am in your house. I have done nothing wrong but am being killed for my wealth. Please help me in my suffering, and use your power to rescue me.” He promised me to do this, but he felt that it would be best to have a word with Theognis, who he thought would do anything for money. While he was talking to Theognis—as it happened, I was familiar with the house and knew it had two doors—I decided to try and save myself. I reckoned that if I was unnoticed I would be safe, and if I got caught, nothing worse would happen to me if Theognis had yielded to Damnippus’ persuasion to accept money, whereas otherwise I would die anyway. With this in mind, I began my escape while the others were engaged in guarding the outer door; the three doors I had to get through all happened to be open. I went to the house of Archeneus the shipowner and sent him to the town to find out about my brother. He came back an told me that Eratosthenes had caught him in the street and dragged him off to prison. After hearing this, I sailed the following night to Megara. As for Polemarchus, the Thirty sent him their customary instruction to drink hemlock, without telling him why he was to die. He did not even get a hearing and a chance to defend himself. His body was brought back from the prison, but they would not allow us to conduct the funeral from any of our three houses. Instead, we had to hire a shed in which to lay him out. We owned plenty of cloaks, but when we asked, they would not give us a single one for the burial. Instead, one of our friends gave us the cloak for the burial, another the pillow, and others what each one happened to have. (tr. Stephen C. Todd)