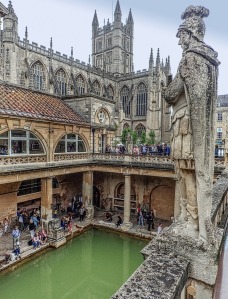 The following winter was taken up by measures of a most beneficial kind. His intention was, in fact, that people who lived in widely dispersed and primitive settlements and hence were naturally inclined to war should become accustomed to peace and quiet by the provision of amenities. Hence he gave encouragement to individuals and assistance to communities to build temples, market-places, and town houses. He praised those that responded promptly and censured the dilatory. As a result they began to compete with one another for his approval, instead of having to be compelled. Further, he educated the sons of the leading men in the liberal arts and he rated the natural talents of the Britons above the trained skills of the Gauls. The result was that those who just lately had been rejecting the Roman tongue now conceived a desire for eloquence. Thus even our style of dress came into favour and the toga was everywhere to be seen. Gradually, too, they went astray into the allurements of evil ways, colonnades and warm baths and elegant banquets. The Britons, who had had no experience of this, called it ‘civilization’, although it was a part of their enslavement. (tr. Anthony Richard Birley)