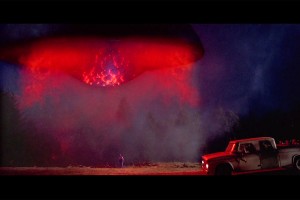 When Livius Drusus, tribune of the people, was passing his laws, and the Italian War began, many prodigies appeared in the city. Around sunrise a ball of fire flashed out of the sky with a might sound from the northern regions. At Arretium as they were breaking bread blood flowed from the middle of the loaves. In the territory of the Vestini for seven days it rained stones and potsherds. At Aenaria a flame which came out of a cleft in the earth flashed out to the sky. Around Regium part of the city and the walls were destroyed by an earth tremor. At Spoletum a ball of fire with a golden hue rolled down to earth. It increased in size and after it was seen being carried from the land to the east it covered the sun with its magnitude. At Cumae on the citadel the statue of Apollo perspired. In the Circus Flaminius the temple of Piety which was closed was struck by lightning. At Asculum Romans were killed because of the games. When the Latins drove flocks and herds from the fields into the city, it caused a butchery of men everywhere. The herds were agitated into such a state of madness that by ravaging them they represented the hostile war and tearfully with their many loved ones they foretold the calamitous event to their own people. (translator unidentified)