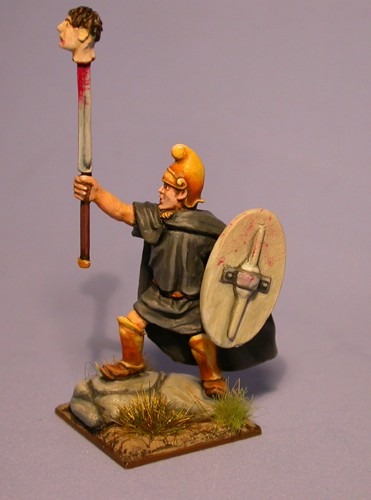 It is a repulsive task to describe the savagery and cruelty of the Moesians and their barbarity surpassing that of all other barbarians. One of their leaders, after calling for silence, exclaimed in front of the host, “Who are you?” And when the reply was given, “We are Romans, lords of the world,” “So you will be,” was the answer, “if you conquer us.” Marcus Crassus accepted the omen. The Moesians immediately sacrificed a horse in front of the army and made a vow that they would offer up and feed upon the vitals of the slaughtered leaders of their enemies. I can well believe that the gods heard their boast, for they would not even endure the sound of our trumpets. No little terror was inspired in the barbarians by the centurion Cornidius, a man of rather barbarous stupidity, which, however, was not without effect upon men of similar character; carrying on the top of his helmet a pan of coals which were fanned by the movement of his body, he scattered flame from his head, which had the appearance of being on fire.
Though the Thracians had often revolted before, their most serious rising had taken place now under King Rhoemetalcis. He had accustomed the barbarians to the use of military standards and discipline and even of Roman weapons. Thoroughly subdued by Piso, they showed their mad rage even in captivity; for they punished their own savagery by trying to bite through their fetters.
The Dacians cling close to the mountains, whence, whenever the Danube froze and bridged itself, under the command of their King Cotiso, they used to make descents and ravage the neighbouring districts. Though they were most difficult to approach, Caesar resolved to drive back this people. He, therefore, sent Lentulus and pushed them beyond the further bank of the river; and garrisons were posted on the nearer bank. On this occasion then Dacia was not subdued, but its inhabitants were moved on and reserved for future conquest.
The Sarmatians range on horseback over wide-spreading plains. Them too it was deemed sufficient to debar from access to the Danube, and Lentulus was entrusted with this task also. Their territory consists entirely of snow, ice and forest. So barbarous are they that they do not even understand what peace is. (tr. Edward Seymour Forster)