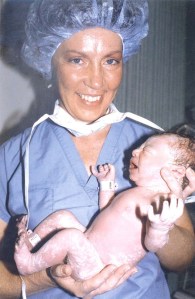 The ancients didn’t have obstetricians, and as a result, women because of modesty perished. For the Athenians forbade slaves and women to learn the art of medicine. A certain girl, Hagnodice, a virgin desired to learn medicine, and since she desired it, she cut her hair, and in male attire came to a certain Herophilus for training. When she had learned the art, and had heard that a woman was in labor, she came to her. And when the woman refused to trust herself to her, thinking that she was a man, she removed her garment to show that she was a woman, and in this way she treated women. When the doctors saw that they were not admitted to women, they began to accuse Hagnodice, saying that “he” was a seducer and corruptor of women, and that the women were pretending to be ill. The Areopagites, in session, started to condemn Hagnodice, but Hagnodice removed her garment for them and showed that she was a woman. Then the doctors began to accuse her more vigorously, and as a result the leading women came to the Court and said: “You are not husbands, but enemies, because you condemn her who discovered safety for us.” Then the Athenians amended the law, so that free-born women could learn the art of medicine. (tr. Mary Grant)