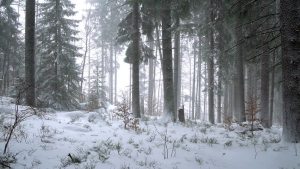 We have arrived at last, and safely, too, though the gods above and below, it seems, conspired against us. What a dreadful journey! From now on, I shall feel superior to heroes such as Hercules or Ulysses. Juno was against us: she always dislikes poets. She stirred Aeolus up once again and, not content with unleashing the winds’ rage at us, used every weapon in her armoury: biting cold, snow, hail, rain, showers, mist, in fact every mean trick, sometimes one at a time and sometimes all together. The first evening, after a prolonged period of rain, a sudden keen frost made the road extremely hard going; on top of this came a heavy snowfall, followed by hail, and then again rain, which as soon as it touched the ground, or a tree, turned immediately into ice. Everywhere you would have seen the ground covered with a layer of ice; and its surface was not even flat, but had horribly sharp little ridges protruding all over it. You would also have seen the trees so heavily laden with ice that some of them were bent over, with their tops touching the very ground, while others had branches ripped off or their trunks split in two, and others again lay completely uprooted. The old countrymen swore to us that they had never seen such a sight in their lives before. The horses meanwhile had sometimes to walk through deep drifts of snow or through thickets coated with ice; sometimes in ruts which were doubly difficult going, because first they set hard with frost and then ice made their edges sharp; and sometimes upon a surface crust which had covered the top layer of snow and was too soft to bear the horses’ weight, yet hard enough to injure their hooves. (tr. Roger Aubrey Baskerville Mynors & Douglas Ferguson Scott Thomson)