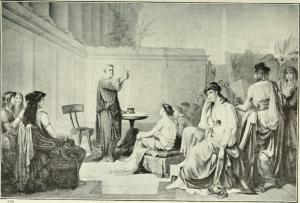 Hermippus gives another anecdote. Pythagoras, on coming to Italy, made a subterranean dwelling and enjoined on his mother to mark and record all that passed, and at what hour, and to send her notes down to him until he should ascend. She did so. Pythagoras some time afterwards came up withered and looking like a skeleton, then went into the assembly and declared he had been down to Hades, and even read out his experiences to them. They were so affected that they wept and wailed and looked upon him as divine, going so far as to send their wives to him in hopes that they would learn some of his doctrines; and so they were called Pythagorean women. Thus far Hermippus. (tr. Robert Drew Hicks)