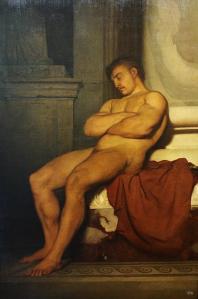 Where a tenant has a slave whose duty it is to look after a furnace, but the man goes to sleep at the fireside and the house is burnt down, Neratius tells us that, if an action is brought against the tenant on his lease, he is bound to make it good, if he was negligent in the selection of men to do the work; if, however, one man lit the fire in the furnace, and another was negligent in attending to it, will the man who lit the fire be liable? The fact is that the one who had to attend to the fire did nothing at all, and the one who lit the fire in the proper way did nothing wrong. What is the upshot? I should say there is an utilis actio both against the man who went to sleep beside the furnace and the man who was negligent in looking after the fire; and no one ought to say, in the case of the man going to sleep, that he was overtaken by a natural human weakness, as his duty was either to put the fire out or else to guard it in some way that would prevent it from spreading. (tr. Charles Henry Monro)