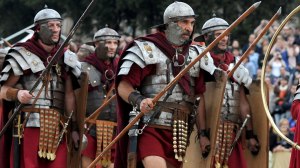 Who was he, who first forged the fearful sword?
How iron-willed and truly made of iron he was!
Then slaughter was created, war was born to men.
Then a quicker road was opened to dread death.
But perhaps it’s not the wretch’s fault we turn to evil
what he gave us to use on savage beasts?
That’s the curse of rich gold: there were no wars
when the beech-wood cup stood beside men’s plates.
There were no fortresses or fences, and the flock’s leader
sought sleep securely among the diverse sheep.
I might have lived then, Valgius, and not known
sad arms, or heard the trumpet with beating heart.
Now I’m dragged to war, and perhaps some enemy
already carries the spear that will pierce my side.
(tr. Tony Kline)